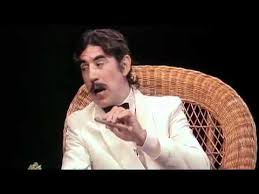 There is an old Monty Python skit called “The Four Yorkshiremen” and during high school, a friend and I had it memorized line for line. For those who haven’t heard it, the members of the comedy troupe are sitting in a lounge with glasses of champagne and expensive cigars talking about how “we had it rough when we were young”. Following the Paul Davis seminar on Tuesday evening and learning about all the challenges that parents and their children face regarding online safety, I mused with a similarly-aged (eg: old) colleague about whether or not life was easier when we were kids.

I think every generation changes its mind about this. I lived in the country and complained that our TV antenna only got three channels but I remember my parents reminding me that they never had a TV when they were my age. I am sure that when they whined to their parents that they didn’t have a TV they were reminded that when THEY were kids they didn’t even have a radio. I am sure I could go back even further and hear my ancestors as teenagers complain that they didn’t have a car, electricity, indoor plumbing, etc..

When Davis informed our Grade 5/6 students that they were not legally able to have Facebook, Instagram or Musical.ly accounts (and 30% of them do!), I thought about what I did at that age to keep myself busy at home. My parents ensured that I had lots of household chores and my Mom had a rule that we had to play outside for one hour (with or without our friends) after coming home from school. If I had ever become an NHL star, my Dad could have sold our dented garage door on eBay! My version of “tech” was making graphs of my hockey card collection (sorted by team, which player represented most, etc.). Exciting stuff, right?

I am not sure when the argument “they should be teaching this in the schools” came up but I know that when it came to safety, we blazed down snowy hills on our crazy carpets and skated around the outdoor ice rinks without wearing helmets whether we were at home or at school. When it comes to online safety today, the school can control the internet access of its students while studying but once the school day is over, this responsibility falls to us as parents.

Paul Davis believes that most of us are failing our kids because we are too trusting as parents. He pointed out that 90% of all cyber-bullying and age-inappropriate internet activity takes place when kids are using technology in their bedroom (and has not had any of the police groups who have heard him speak tell him otherwise). He also noted that whenever schools learn that there are online problems between students, it started with kids being able to say and do things online in the privacy of their room and with little or no restriction to the internet.

Is growing up today better than we were kids? Mr. Davis would probably say that it depends on the parents; if you are giving similar rules and freedoms to your kids as your parents gave to you, then they probably have it better.