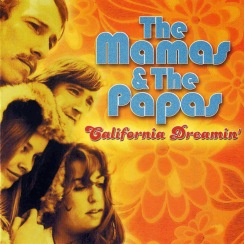 “All the Leaves Are Brown and the Sky is Grey”

While the inspiration for the headline could have been the weather on Friday the actual inspiration for this week’s blog comes from Mrs. Pengelly, one of our junior kindergarten teachers. She mentioned to me that the Primary Campus Choir is learning “California Dreamin'” this year. She noted how cool it was that they were singing a song made popular by The Mamas and the Papas, a band featuring singer Denny Doherty. Doherty lived in Mississauga after his active stage career and was a “Mentor/TEAM Dad” with a son and daughter attending in the 1990s.

The degrees of separation don’t end there. Denny’s son, John followed in his Dad’s musical footsteps and was a founding member of the band illScarlett. Their first demo album was recorded at Metalworks Studios in Mississauga, a place co-founded by Rik Emmett of the famous Canadian band, Triumph. Emmett’s three children also attended the school in the 1990s and the musical connections continued when jazz great Oscar Peterson’s grandchild attended the school in the 2000s.

We also have some political connections with our parents here at the school. Longtime Conservative member Tony Clement is also a longtime Mentor/TEAM Dad and Mississauga politicians Steve and Katie Mahoney enrolled their children at our school, including current councillor Matt Mahoney. Every single one of the Mississauga mayors in the past 40 years have a connection to the school, too! Hazel McCallion’s granddaughter was a Grade 8 graduate and Bonnie Crombie was a regular at the MTPA Volunteer Breakfast with her kids’ connection to the school.

For me, personally, the most memorable “famous” Mentor parent was here only in my first year at the school. I was a huge hockey fan as a young boy and my favourite line in hockey was from the Buffalo Sabres. “The French Connection” consisted of Gilbert Perrault, Richard Martin and René Robert and I was a right winger in hockey so Robert was my favourite. He had finished up his career with the Toronto Maple Leafs (the year that the Leafs traded Darryl Sittler and broke my heart forever) and was still living in the area. I found out that his son Mike was in his graduating year here and even though René did not come to very many school functions, I did get a handshake from him before the end of the year.

We are still a fairly young school but it is probably only a matter of time before it is not our former parents but our former students who will be the celebrities. Come to think of it, there is so much musical, athletic and academic talent within our walls that I am sure it will be the case.